Observation; severe pain in my neck while doing the nasal rinsing neti approach … – to be examined?

Background; In the light of 1,6 years hard permanent blasting sound-pain (PBSP, which may be associated with head trauma – handless into a concrete pillar) this link is addressing for examination a somewhat new possible psychophysiological dysfunctional pathway (partly) causing this hard to stand problem, which first was assumed to be part of the very complex and indeed not very well understand multifaceted tinnitus syndrome.

A second, not permanent but har (high-frequent knife-cutting sound/pain) probably mostly related to high humid weather more than air pressure may in some way interact with PBSP, which increase during sleep for each weak-up usually after 1-2 hours with increasing for each wake-up. If I am sleeping as long as 4 hours both symptoms are similar to exploding brain but lasting for 3-10 hours – the worst condition still after 1,6 years.

Observation: Using nasal rinsing (perfect info https://www.youtube.com/watch?v=SXUyqna4QZA*) suddenly “stabbing pain” occur in my neck (some localization as my PBSP, see picture below) the emerged while using the yoga communicating vessel approach “neti”, which means body pH warm water is “sucked” in according to this physic principle (the “pharmacy syringe approach” – PSA – is sprayed into the nostril) – but not with the PSA – at first. Then later also with the PSA. When I bend me down water is returning to the nostril (also when no pain!).

Hypothesis elaboration: As the Vasalva maneuver function ok, probably not Eustachian Tube dysfunction given not patulous. The pain indicates that the water is sucked and drained (through leak?) into some cavity where the pain is created.

How did ”hit on” a dysfunctional pathway emerged: First “stubbing pain” occurred with communicating vessels method (neti) automatic sucked into an assumed wrong pathway at the same time as into the opening into the other nostril. Then also with the syringe method “found the way to new assumed opened” as earlier by the communicating vessels method. More precise; much more pain when water enters the right nostril making pain in the left part of my neck (see picture below). This effect of nasal rinsing seems now to occurs at time, preventing me to test very odten of course while sharp pain. But, on the other hand, this observation may help to find explanations also for the main permanent severe sound-pain permanent last 1,6 years day and night while somewhat same positions/localization! That is, probably may this surprising emerging symptom while rinsing may give a hint about my hard PBSP (still permanent hard) enabling to get relevant support from adequate specialists and find ways to recovery – much needed!

Move backward the above? PBSP gets in my case worsened by neti but get this obvious dysfunctionl “behavior” be reversed? I use both creative exercised from Qui Kung (Chang 1985) and my head bent straight down (not easy but find a way) with adjunct strategies to try to manually make drainage. First could not breath through my nose (surprising while practiced many eastern strategies for 30 years while measure dynamic www.ipbm.se parameters) but then did it well but interesting sensations both in my nose and (surprising) ears. No substantial effect on symptoms (may also be prevented due to Limbic conditioning last 1,6 years day and night). I continue and report below in due time.

Updated 2021-05-18; working on according the above “backwash” with different approaches, where one, bent forward optimal was promising but interplay by refluxed was disturbing. But the change indicates that there is a leakage into a cavity (perhaps “silent hypoxia interact) emerged when I used the “communicating vessels” approach for nasal rinsing and related “stubbing pain” made the PBSP dysfunction visible. If so, where is this cavity? And how did it was connected during the nasal rinsing – something which is thought of not problematic?

2021-05-22 Suddenly two more diagnostic hypotheses cues to add to the above;
(a) the above promise one,
(b) last weeks clearly increasing general inflammation symptoms (https://www.cemed.co.uk/silent-inflammation/#:~:text=It%20is%20a%20low%2Dgrade,mood%2C%20digestive%20problems%20and%20fatigue & https://www.medicalnewstoday.com/articles/248423), which can indicate low-grade chronic “silent is becoming gradually less silent” Inflammaging and
(c) blasting occipital symptoms are increasing during night but also while I treadmill walk 10 minutes and decrease to pre-stimuli level when I do shoulder/neck exercise – may be associated to physiotherapist hypothesis about cervikal arthrosis.

Cervikal instability was early canceled out one year ago by orthopedic physician but is now back again as hypothesis to work with!

NB the below will be reworked to be more readable – when I get time. I do think it is important to as clearly as possible understand what surprising observed symptom is during almost equal conditions where two different mechanisms are only difference enabling substantial investigation – given my observations are correct! This do not often happens where symptoms can possibly lead the way.

Nose rinsing via the yoga method and the “pharmacy” method are two approaches to do nasal rinsing – a huge differences I observed based on a surprising not very nice symptom in terms of sharp stabbing pain in my neck (Occipitalis) with the Yoga method which function according to the principle og communicating vessels – the water is drawn automatically up in the nostril which the pipe is connected to. The pharmacy method squirt up water – no pain for me.

Nasal cleansing (neti) is a kriya (cleansing technique) that has been used to purify and cleanse the body by yogis in India for over 5000 years. It may seem a little bit strange at first, but usually people enjoy nasal cleansing and decide that they want to continue with the practice https://rawtravel.com/insights/the-ancient-yogic-practice-of-nasal-cleansing/#:~:text=Nasal%20cleansing%20(neti)%20is%20a,to%20continue%20with%20the%20practice. .

That is; based on the principle of communicating vessels (the power of physics finding its way by its own law) =  water is automatically drawn into the nostril according to the principle of communicating vessels enable the water “to find its own way”, e.g. can thus seek a cavities that it should not function be “investigated”. The pharmacy method, on the other hand, is to inject water (the external power forcing/pushing/..) into one nostril and it come out in the other.

When I use the yoga method, I get stabbed in the back of the head very concentrated two points (depending on what nostril is receiving the water. It is very painful and not nice to activate to study empirically. This does not happen in the pharmacy method where the non-water is automatically sucked in but is pushed in via the syringe.

As I see it, there is a reason for this difference and that is that the water thus seeks out some cavity that it should not be and hence the pain arises it can be a very small cavity that may not be air moistened that is, it can be a so-called silent hypoxia. The questions then are (a) examine what happens and how can what is found as dysfunctional normalized. I do think this means a systems flow integrating multidisciplinary perspective which perhaps ENT-specialist researcher may already have found out?

Ask here for support by you reading the above. Do you have any own ideas or anyone who might have. So many people are using (and liking very much) the neti approach over many years that either have done any mistake (other reasons that what I believe) or I am the only one who have face this pain while using neti – each time (although the pain prevent me to do too many tests).

The above can be a new way to understand 1,6 years with permanent blasting “sound-pain” Occipital located (same place as my neti pain) hard to live with – something which could not at all be associated with ear dysfunctions and the concept (very hard) tinnitus can be misleading.

NB you may need clinck so the pictures will be shown 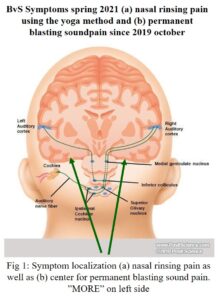 Picture below the neti pot with the Yoga method 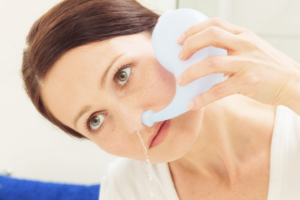 One more new (2021-05-02) observation which may complicate further or increase the understanding of  what/why/how/ .. ?

I can use the Nasaline (”pharmacological”) method in two ways; (i) either not very ”up into the ”canal” between the two nostrils and (ii) “a bit very up” but still pass water out of the other nostril. When I do “ii” some pain like when using the neti pot but not so sharp. Is this a consequence of first “some pathway was open up when I first time tested the neti pot which then gradually also is valid for the Nasaline method?

What I try to find out is – while this localization is the same/close to the permanent main hard problem I have been suffering from since October 2019 – very hard to stand. I do believe I am not the only one suffering so hard, motivating to work with this dysfunction by clinical reasons for those probably suffering while learning “there is no treat” (which is a inhuman way in stead of “it present we lack knowledge what/way it is as well as what to do to treat it”).

The above surprising symptom may encourage us to search for complex systems knowledge interactions as well as test interventions. Where I have now (also suddenly) have the benefit of get Osteopathic intervention, which indicate some effects after 3 sessions.

Without a close examination we do not know …

So – a mail to me would be appreciated
bo.vonscheele@stressmedicin.se